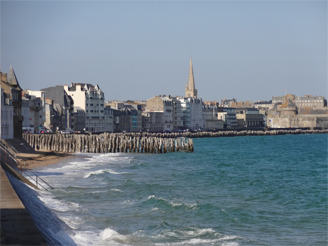 The city of Saint Malo is considered by many to be the most attractive channel port in France and has some of the best sandy beaches on the Emerald Coast.

Saint malo built its wealth during the 16th to 18th centuries, when it was a base for many 'official pirates' - these were ships approved by the King of France to attack and seize the goods from ships of other nations. It was a profitable trade as evidenced by the town that we can now see - and also its fortifications - much of which was paid for by the activities of these pirates.

The town was largely destroyed during the invasion of France in 1944 and much of what we now see is a reconstruction, albeit on of the very highest quality in meticulous detail.

The old city is known as Intra Muros or 'within the walls' ,  where you can admire the grand granite houses dating from the days of the pirates, and it lies behind massive ramparts which encircle the town.  The streets are lively with shoppers, bars and restaurants. Once a fortified island Saint Malo is now linked to the mainland but with sea all around it still feels like an island.

One of the best way to discover Saint Malo is to follow the 2 km walk around the high ramparts that encircle it, with good views of the town itself and also of the beaches, coast and surrounding area.

There is a 'little train' which runs around the old town visiting all the main sights and there are various boat trips than can be made from the harbour.

The Grand Bé, grave of the romantic writer Chateaubriand, the Petit Bé  and the 17th century are all accessible at low tide.

Be warned that if the tide comes in you are stranded on the islands until the tide changes!